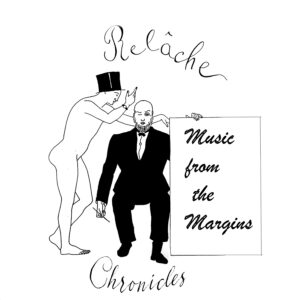 THE RELACHE CHRONICLES is a podcast about musicians residing in what we call “the Margins of American Music.” In these 30-to-45-minute episodes, we’ll play recordings – primarily by The Relache Ensemble from Philadelphia – of complete musical works plus commentary by composers, performers, and others with insight to the music. Throughout the podcast, we’ll discuss the guest composers’ processes, how they utilized current and past technologies and how the acoustical properties of a given space informed the creation and performance of a musical work. Finally, we will discuss how the composers’ relationship with the musicians brought the music to life. The first set of five episodes feature the music of John Cage and Robert Ashley, Joe Kasinskas, Pauline Oliveros, Guy Klucevsek, and Eve Beglarian. THE RELACHE CHRONICLES is produced, edited, and recorded by Joseph Franklin, Arthur Stidfole, and Joe Kasinskas. Throughout their careers, they have been performing musicians, composers, executive and artistic directors, radio hosts and authors, dedicated to the music of the 20th and 21st centuries.

Episode No. 1 The Relache Ensemble. Beginning with a brief history of the ensemble through commentary by Joseph Franklin, Arthur Stidfole, and Joe Kasinskas, they reminisce about the ensemble’s early days in Philadelphia and how the name “Relache” was chosen. The musical works featured are “Forever and Sunsmell” by John Cage and “She Was a Visitor” by Robert Ashley, both performed by the Relache Ensemble.
Duration is 34’12.”

Episode No. 2 Joe Kasinskas. One of the more dynamic works in the Relache Ensemble’s extensive catalogue of site-specific performances is titled “Echoes in Palindromes” by composer Joe Kasinskas. Following a carefully scripted graphic score, four performers move throughout a performance space playing notated musical palindromes amidst reverberant echoes, the result of audio-playback procedures while two “microphonists” follow their movements in search of the resonant frequency of the room. Part dance, part ritual, part dream, this work is an intuitive leap toward sonic truth. Duration is 33’10.”

Episode No. 3 Pauline Oliveros “The Well.” This is a major work by the pioneering composer, sound artist and activist, Pauline Oliveros. Created in collaboration with dancer-choreographer, Deborah Hay, and the Relache Ensemble while in residence at the Yellow Springs Institute for the Arts and Humanities in Chester Springs, PA, “The Well” has been performed throughout the U.S., Europe, Japan, and South America by Relache and recorded on Hat Hut Records. The podcast team discusses how “The Well” was developed and shaped in collaboration with Pauline and Deborah, with assistance from Guy Klucevsek, who was an original member of the Relache Ensemble. Duration is 34’34.”

Episode No. 4 Guy Klucevsek. Two works by the eminent accordionist-composer, Guy Klucevsek are featured. “Oscillation No. 2” is performed by pianist Jenny Lin and “The Flying Pipe Organ of Sian” is played by the Relache Ensemble. Guy Discusses these works with the podcast team, at times playing examples on the accordion. Guy is an innovate accordion virtuoso who has created multiple works for that instrument while commissioning numerous others by composers from throughout the world. He has composed music for dance, theater, and ensembles world-wide and has performed as a solo and ensemble accordionist throughout the U.S., Europe, and Japan. Duration is 50’38.”

Episode No. 5 Eve Beglarian. Three works by composer and media artist Eve Beglarian titled “Fresh Air,” “Machaut in the Machine Age,” and “The Marriage of Heaven and Hell,” performed by the Relache Ensemble and the MATA Ensemble are featured. Throughout her extensive composing career, Eve has collaborated with numerous performers – poets, theater artists and directors, choreographers, and visual artists – to create works in a variety of media, including her long-term project named Book of Days. Listen as Eve and the podcast team discuss her career and how each of the works performed were created. Duration is 49’30.”