Settling Scores: A Life in the Margins of American Music 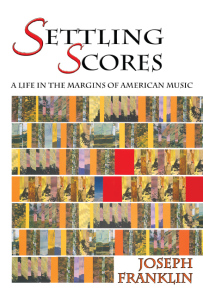 “Settling Scores: A Life in the Margins of American Music” describes a life lived in the margins of America’s (“classical”) new music business, a life influenced by artistic and political transformation. From a working-class background in North Philadelphia to the sanctity of European concert stages, from imagined dangers lurking along the waterfronts in mysterious Asian and European cities to the real dangers lurking in the minds of those who uphold the status quo in American music, “Settling Scores…” reveals a life of one who embraced change and, in the process, gained political leverage and intellectual freedom. It is a story of Joseph Franklin and it is a snapshot of America’s “classical” music culture in the final quarter of the 20th century. The reader of this book will learn about the accomplishments of a legion of musical artists and producers who have dedicated their creative lives to our living musical culture. By directing innovative programs, producing concerts and commissioning new musical works and by co-founding and directing a prominent Philadelphia music ensemble – Relâche – Franklin helped shape late 20th century American music. The book includes a detailed history of the Relâche organization from its founding in 1977 until Franklin’s departure in 1998 and places in context Philadelphia’s role in championing new musical works during those years.